Stacey Roberts is an awesome guy who had a bit of a rotten childhood. He’s made the most of it by growing up to be an intelligent, funny and articulate man who used it to his benefit—he’s written a humorous account of his younger days, which I recommend you grab if you want a laugh. And, in a first for my blog, I have a guest interviewer—author, publisher and podcaster Donna Cavanagh—doing all the hard work. Take it away guys! 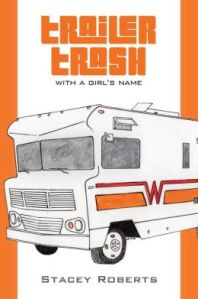 1.Tell us about Stacey Roberts: Where were you born and where did you grow up?

I was born in New Jersey, in a little town called Garwood. We lived there for nearly ten years before we moved into the famous Winnebago and traveled the country. We went from New Jersey to San Diego, California, to Lake Tahoe, California (where my stepfather Ted the Drug Dealer began his life of crime) to Hollywood, Florida (where he perfected it).

2. How would you describe your family life growing up?

My mother, my grandmother, and my aunt all lived pretty close to us in New Jersey, so we got to see family all the time. My parents got divorced when I was five, and after that we moved into the basement of our house like we were hiding out from the agents of a totalitarian regime. My mother needed the living space to start a business. For the next ten years, I lived in spaces that weren’t much bigger than my bed. I also remember being very poor; there was never money for anything, but it didn’t stop my mom – we took vacations and things like that, just always on the cheap. We went to Washington, DC once and slept in the car at the Washington Monument. The DC police enjoyed that.

3. A lot of people have “dysfunctional” childhoods and grow up bitter. You went the funny route. How has humor helped you? (not trying to be insulting here but trying to show that it was not all fun and games for you.)

Humor was a surprising side-effect. I had been telling these stories for years to my friends, expecting sympathy, a hug, or maybe some edible food (since my mother can’t cook). I was looking to share my pain. But all my friends just kept laughing. That was my first sign that my dysfunctional childhood was not as tragic as I thought (or hoped). Once people whose opinion I trusted told me that my childhood was hilarious, I started looking for the funny instead of the sad. Perspective is everything.

4. Your book  is funny and poignant.  How did it make you feel writing it?  What about your family?  Did you consult them writing it?

Dysfunctional or not, you only get one childhood. One of the symptoms of growing old is that you forget what it was like to be a kid, with all the wonder and helplessness that comes with it. Writing this book made me remember incidents and even people I had forgotten. The next door neighbor who kind of took my father’s place after the divorce – the guy who could fix my bike or teach me to throw a baseball, the kids my age who I ran around the neighborhood with, etc. Stephen King once wrote that you never have friends as good as the ones you had when you were a kid. I was glad that writing this book made me remember them.

Some of my cousins read these stories in blog form. They were the best sounding board, because they told me that I had nailed the characters of my mother, my brother, Ted the Drug Dealer. They never knew about some of the stories, particularly the ones after we moved into the motor home and left the east coast. The feedback from my cousins could be distilled down to, “Well. That explains a lot.”

My mother hasn’t read them. She doesn’t have Internet. My brother read a couple and took issue with them – he never thought he was the favorite son. It is important for him (and the readers) to know that this book is not a memoir – I took events from my childhood and added a few things for humor’s sake, and exaggerated some of the characters. But the people who know my mother recognize her easily in the book.

Finally, one of the things I gained from writing Trailer Trash is a whole new appreciation for my mother. I may have disagreed with her methods, but she did the best she could after her divorce with two small kids.

5. Besides the humor, what is the one thing you want a reader to take away from this book?

6. Tell us about your writing? You have another career as well, so what made you decide to be a writer as well?

I always wanted to be a writer. I was carrying around a notebook at 11, making up stories.  I went to college to get a history degree – I have a masters in European History, but I started an IT company while in grad school. The career I have now is the side job that’s lasted 20 years. If I could write books and teach full time and still be able to maintain the lifestyle my daughters have become accustomed to, I would do that.

7. What are your future writing plans?  Where would you like to go from here? Would you stay in humor or do you want to try other genres as well.

I have a series of four Trailer Trash stories called The Fall of Ted the Drug Dealer – the story of the cop who pursued him and put an end to his life of crime. After that, Trailer Trash, With a Girl’s Name Book 2. I am also working on a novel called Rain Songs about the Kennedy assassination that is due out this November. Mark Gosson, creator of the Xombee Guy webcomic and I are working on a zombie novel unlike any in the genre that we hope to have out in 2014.

You can grab Trailer Trash With a Girl’s Name at all ebook retailers, and you can follow Stacey on Twitter @SRoberts1971.

I know this is primarily a blog about books, but hey, there’s no law against sharing awesome news about indie movies :). Here’s one a little dragon told me about and it looks like a lot of fun. Wish I lived in Washington D.C. (well I don’t really but maybe wish I was visiting) so I could attend. Don’t have too much fun without me!

Do you have your ticket yet? You cannot miss the red carpet premiere of Night of the Templar. Here’s the deets: Written, produced, directed and stars Paul Sampson. Let’s not forget stars Norman Reedus of The Walking Dead, Udo Kier of Blade, Billy Drago of The Untouchables and it is the last feature film of the late, great David Carradine of Kill Bill and Kung Fu. Tickets include pre-event reception, screening, Q&A, celebrity after party.