Well, here it is, the moment I’ve been waiting for. My alter ego, Eloise March, has written something exciting, fresh and fun — think Bridget Jones Diary meets The Vagina Monologues. And now I get to reveal the most amazing cover done by awesome cover artist and graphic designer (among other things) and dear friend, Sol Pandiella-McLeod. So, here it is. Drum roll…. 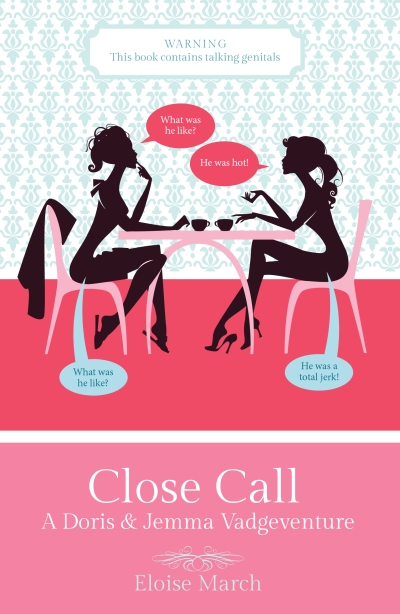 Close Call: A Doris & Jemma Vadgeventure is chick lit, or as they now say, contemporary women’s comedy fiction. It’s the first of a series of novellas, each one it’s own story but with the same characters — kind of like a tv series. So, what is it about? Read on.

Twenty-two year-old Jemma can’t seem to get her life in order. Her track record with men stinks, she constantly worries about getting fat and ending up a spinster at thirty, and to top it off, she has to be a bridesmaid at her most-hated cousin’s wedding. She feels like her life is over, until Doris decides to help out. Who’s Doris? Doris is Jemma’s vagina and she thinks more of Jemma than her own brain does. Doris is on a mission to save Jemma from herself, but is the task too much for one vagina to handle?

If you’re as excited as I am, don’t worry; it will be available as an ebook and paperback from all the usual outlets on 1st December, 2013. Visit the Facebook page or twitter to get the links when it goes live.

Are you a reviewer who uses NetGalley? If you are, Shadows of the Realm, the first book in my YA epic fantasy is on there for a month. It has dragons, a panther, action, and evil gormons. If you’re looking for another world to escape into then this is the book for you. It’s even been number #1 in two categories on Amazon. So, what else can I say? Not much. Wow this is a really short blog post. Hmm, okay, I’m off to get a coffee. Bye 🙂

Shadows of the Realm